Well, I'm on vacation again. My mom and I decided to have a mom/daughter trip on a cruise while my brother and his best friend run around the ship as well. Since there is no wi-fi readily available on this cruise either -- and I'll be wanting to lay out and enjoy life without electronics anyways -- I am scheduling these next few to post while I'm away, so don't think I'm ignoring if you contact us or comment. When I'm back, I'm hoping I see lots of comments and such!


On to this novel, Gravity by Melissa West. 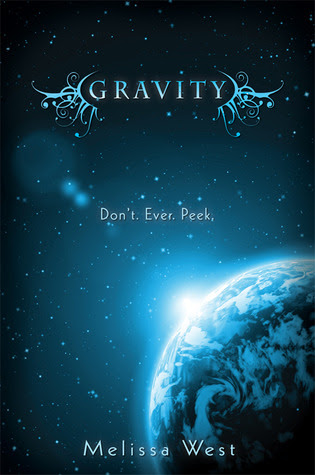 Summary: In the future, only one rule will matter:
Don’t. Ever. Peek.Seventeen-year-old Ari Alexander just broke that rule and saw the last person she expected hovering above her bed — arrogant Jackson Locke, the most popular boy in her school. She expects instant execution or some kind of freak alien punishment, but instead, Jackson issues a challenge: help him, or everyone on Earth will die.Ari knows she should report him, but everything about Jackson makes her question what she’s been taught about his kind. And against her instincts, she’s falling for him. But Ari isn't just any girl, and Jackson wants more than her attention. She’s a military legacy who’s been trained by her father and exposed to war strategies and societal information no one can know — especially an alien spy, like Jackson. Giving Jackson the information he needs will betray her father and her country, but keeping silent will start a war. (source: Goodreads)

"So what's a girl to do?" you may be thinking. "And why do I want to read about aliens?" Well, I tried a chapter of this before committing to the novel myself. See, I'm not into the whole "aliens" craze... or so I thought. Then I read this book. And the story and details have been staying with me ever since. Even the last novel I read I could barely focus on or remember the details of because I was too busy thinking about the characters of this novel!

Let's start with Ari. She is already being forced into a marriage with her friend by their parents. No love is there, but she knows it's for the best... or is it? Then she meets Jackson. Sexy, sexy Jackson. His eyes look like a lake that you can happily swim in forever, and he is nothing like what Ari had ever been told about his kind. Your heart will struggle this entire book, wondering where the truth of everything lies, and whether everything will end on a positive note.

Now, on to dynamics... The prologue of this novel will have you hooked right away, no questions asked. Your heart will be pounding with the feelings of Ari as a little girl. You'll be swept up into this novel immediately, and you'll start to feel as if you are Ari, complete with all of the emotions and the . The language of the novel is beautiful. I kept highlighting all of these descriptions of places as well as wise words spoken by the characters. If you keep a quote book like I do, you'll be able to get plenty out of here. One of my faves is this one, from page 30: "'Pride?' He gives me a mock grin. 'You define what makes you proud, not someone else, and certainly not rules that would have your friends get beaten. There's no pride in that.'"

In Conclusion: This book is really good, even if sci-fi and/or aliens aren't your things. You'll love the romantic side of things as well as the war aspects. You'll catch yourself holding your breath without meaning to, and having your heart just as torn as Ari. You may get trapped in the novel and find you've lost time, but in a good way.

Suggestions: Read when you're okay to knock out a few chapters at a time. The novel is 215 pages. This novel is not for the faint-of-heart though, so if you are easily disgusted by blood or such, stay away from this novel. If you can brave your way through it, it's worth it.

Go to a comfy chair and read away. If warm enough, go outside and read under the stars at night. (Stay safe though, please.) Or just get snuggled under your blankets and look out a window at stars while you daydream away with this novel. Enjoy, y'all!

P.S. There's a sequel coming out August 2013, but thankfully this novel doesn't leave you with an unbearable cliffhanger, so no worries!

In Comments: Do you believe in aliens and flying saucers? Why or why not? What would you do or how would you react  if you ever met one?