Well, I have been busy hollowing out a book and making it into an e-reader case for my mom. As of last night, the final night of cutting out pages, I officially put my blood, sweat, and tears into this thing. (Who thought handing me a razor blade with a handle was a good idea? I mean, really? Okay, I asked for it, but still. My poor finger. lol) I just now did some finishing touches. Spray sealing it is the last step. I'm quite proud of this freaking thing, so I'll have to post a picture some time.

Anyways, on to the book that I read and didn't tear up: Jeckel Loves Hyde by Beth Fantaskey.

Goodreads summary: "Jill Jekel has always obeyed her parents rules; especially the one about never opening the mysterious, old box in her father's office. But when her dad is murdered, and her college savings disappear, she's tempted to peek inside, as the contents might be the key to a lucrative chemistry scholarship.
To improve her odds, Jill enlists the help of gorgeous, brooding Tristen Hyde, who has his own dark secrets locked away. As the team of Jekel and Hyde, they recreate experiments based on the classic novel, hoping not only to win a prize, but to save Tristen's sanity. Maybe his life. But Jill's accidental taste of a formula unleashes her darkest nature and compels her to risk everything, even Tristen's love just for the thrill of being . . . bad."

Sounds intriguing, right? Jekyll and Hyde re-imagined! How could that possibly go wrong? I have no clue, but it definitely did.

I had such high hopes. The prologue was intriguing, being set at a funeral for Jill's father. See, I figured it was set later, or maybe was a foundation for something big. Oh, and that the seasons and such would be used later to establish some kind of timeline, sense of time. I was proven wrong quickly.

There is no timeline set in the book. You have no clue when the prologue happened, nor how much time has happened in-between that and the first chapter. Near the close of the book, the date of her father's death is revealed, and so you get a sense of time, but it's too late. And the author seems to ignore the time between. See, there had to be casual contact between Jill and Tristen before chapter one, and after the funeral, but it is given a line or two, dismissed. I wanted to scream at the book, but withheld. After all, it'll get better, right?... Right???

Please don't get me wrong. The idea of this plot is great! I love the plot, and I love the idea of the characters. However, they weren't well-rounded people. They were quickly categorized as completely good or completely bad. Jill was a *gag* Mary Sue character. The story was quite predictable, and the author ensured so with very obvious signs, such as a character suspiciously being overly-eager about something. The annoying part is that the characters all stayed blissfully ignorant of every single thing that was going on around them, and even involving them. If it truly had happened, the characters would be quite a bit more intelligent, and many of the situations they get stuck in wouldn't happen.

Okay, this is my last point of anger with this book, I swear. There is no true back story ever given. How close were Jill and her father? What was Tristen's life before this period? Was it hell or tolerable? What were Tristen and Jill's interpersonal relationship like before any of this happened? Any home lives would be awesome. Feelings, too. But the further to the end you get, the more you realize that you're not going to be getting any information.

Overall, the book feels like you're suddenly thrust into a random person's life, and then you're yanked back out again before you actually get to know anybody at all, including yourself.

The plot is awesome though, which is what kills me.

Rating:A tad over two entire gingerbread men, because a re-imagining of Jekyll and Hyde was a great idea... just poorly executed. 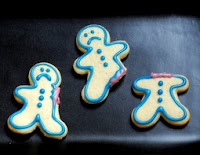 Suggestion: Read for the thrill of the idea, and then just head back to the original Jekyll and Hyde if you really want to. If you want a quick read that's thrilling, head over to a ghost story or paranormal site and read something that's more convincing. If you really want to be scared, look up Ed and Lorraine Warren and see what they did (she still does) for a living. Looking for paranormal romance? A ton are getting released, some already so. Download/find "Winter Escapes," a sampler of over a dozen authors and their works, and then pick from there.
Posted by Alexis at 8:43 PM No comments:

I didn't know if I should comment on the shooting in Connecticut, but how could it not be written about?

In all honesty, there are no words. There truly aren't. We are four days away from the murder of twenty innocent children and six brave adults, and yet seven days until Christmas. We're all stuck between hell and hope, all in utter disbelief that this could have ever happened.

The worst part for those not attached is that he didn't fit the profile we expect. You expect this kid who's been bullied. You expect a kid whose parents weren't aware of him having weapons. And those parents of the kids? Which ones almost kept their kids home that day but didn't? Which ones had a bad feeling but ignored it? Can you imagine being them right now? Or even a parent to one of the four surviving kids? I can't. I can't imagine any of this, nor how this wasn't prevented in some -- any -- way.

I guess nobody, especially me, needs to tell you what we're feeling across the world. Nor do I need to tell you guys what you should take from it, learn from it so the deaths aren't in vain. I just know that I'm going to be holding my family a bit tighter, and keeping my eyes open a bit wider. I'll be thinking about the kids and that whole town every day, and praying for and sending love to every person there.

Again, no words from anybody can describe the feelings, the situation, and obviously, nothing at all will ever be able to explain why. But the least we can do is face the situation and learn from it, right?

Email ThisBlogThis!Share to TwitterShare to FacebookShare to Pinterest
Labels: on a serious note

Sundays at Tiffany's (A Lexi Review)

Oooh, this is a favorite of mine! As a kid, I was addicted to the movie "Drop Dead Fred." If you don't know what it is about, it involves an imaginary friend coming back to his playmate, who is now a grown woman. This is the same idea, but was executed in a much better fashion, the way I wanted that movie to end when I was older.

Here's the official summary of this book (jacked straight from the ever-amazing Goodreads):

"Anne Margaux is a lonely little girl. Her mother, a powerful Broadway producer, makes time for her only once a week, for their Sunday trip to admire jewellery at Tiffany's. Jane has only one friend: a handsome, comforting, funny man named Michael. He's the perfect man in every way. Unfortunately, only Anne can see him.
But Michael can't stay forever. On Jane's ninth birthday he leaves, promising her that she'll soon forget him. Years later, in her thirties, Jane is just as alone as she was as a child. And despite her own success as a playwright, she is even more trapped by her overbearing mother. Then she meets someone; a handsome, comforting, funny man. He's the perfect man all over again."
This book has you feeling every emotion under the sun. If you had/have an overbearing mother, it'll be empowering, and you won't feel alone. If you had an awesome imaginary friend, I envy you, and you may be thinking about them a bit more after this. If nothing in this book relates to you at all, you'll still love it. I forced myself to wait a few months before rereading the book, and it was extremely difficult.

On to the writing... The imagination that it took to come up with this was great. There are no places where it's lagging; every scene has a purpose. The book is not too long, nor too short (though you may want more in the end anyways). The writing is superb, and, no, this subject is not what you'd expect from James Patterson. The transition from the past to the present is flawless. This book will make you wonder just where imaginary friends go when they're not around kids, and who truly came up with them. The imagery is great and, even if you've never visited New York before, you can see the city and its sites through Michael and Jane's eyes. The feelings evoked from this book are strong, and you may have tears if you connect. If you're upset or depressed and want to wallow for awhile, I understand; just stay away from this book.

With this book, you'll be whisked off with Jane to trying to grab hold of your childhood again, and wondering just when you went from confident to self-loathing.

Suggestions: Read on a rainy day in a comfy, over-sized sweatshirt/sweater. Make sure you have the day free of any responsibilities or plans, and just get as comfortable as possible. Snuggle in a warm, fuzzy blanket. Grab your favorite stuffed animal, pet, sibling, whatever, and read away. You may need a drink, so go for your favorite. The day you read this is the day you should indulge yourself.

After the Book: You should definitely rent/stream/buy "Drop Dead Fred" after this. It'll be worth your time, and it will make you laugh. Also listen to Savage Garden's "Crash and Burn." Oh, warning: You may want to make up your own imaginary friend. lol

Did you have an imaginary friend as a kid? What were they like? What would you do if they popped into your life again tomorrow?