I truly had nothing to say yesterday. By the time I did, I was half asleep, so I do apologize for the lack of posts yesterday. I'm going to do a fun post for y'all today to make up for it!

Okay, so I'm going to list words you should know. We need to go ahead and use these on a regular basis! Start a movement with me (and sound intelligent while you do)!


Words to Bring Back

petrichor
The pleasant spell that accompanies rain after a drought.
(This is my favorite one, because the scent is perfection!)

wampum
beads of polished shells strung in strands, belts, or sashes and used by North American Indians as money, ceremonial pledges, and ornaments
(Kinda like the clothes you give to Plato's closet so you can buy more there, or doing the same with books at Half Price Books, like I do! :D)

ephemeral
lasting for a very short time; an ephemeral plant

jollop
a strong liquor or medicine; it's a variation of julep and jalap.
(Southerners, think mint julep.)

dragoman
an interpreter chiefly of Arabic, Turkish, or Persian that is employed especially in the Near East

corrigible
capable of being corrected, rectified, or reformed
(Thus, "incorrigible" means that it's not capable of the above.)

dirigible
a type of aerostat or lighter-than-air aircraft that can be steered and propelled through the air using rudders and propellers or other thrust mechanisms
(Not to be confused with aerodynamic things. Think Zepplin balloon.)

jobbernowl
a fool or silly person

garrote
a method of execution by strangulation; the apparatus used; an implement (like a wire with a handle at each end) for strangulation; to strangle with or as if with a garrote
(I am not condoning strangulation, y'all.)

sycophant
a servile self-seeker who attempts to win favor by flattering influential people
(We all know at least one.)

indecorous
not decorous; not in keeping with good taste and propriety; improper
(Like belching while at tea with The Queen. She'd describe you as "indecorous," then behead you! loljk)

They insult so well, yet sound so lyrical. 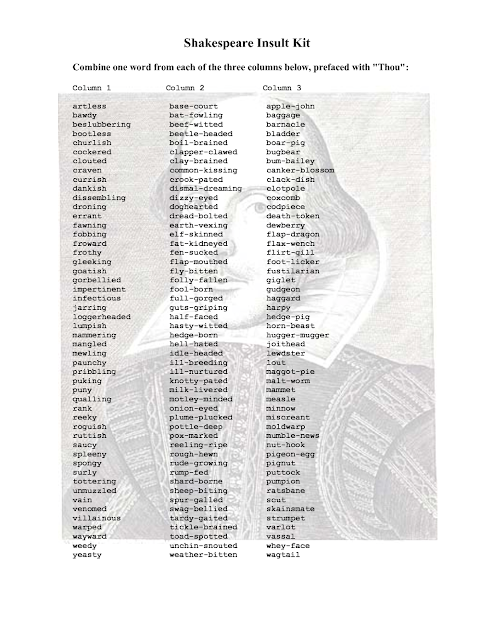 Hope you had fun!