"The Chosen One" (A Review by Lexi)

I just got my brand new laptop! YAAAY! It's an HP Envy with a Core i5 Intel processor and 1 terabyte of memory, plus Kaspersky Security, Windows 8, Beats audio, and Microsoft Office 2013 all on it! Okay, I'll shut up now. I'm praying this will last me for forever... But more on another little guilty pleasure...

Do you ever watch "Sister Wives" on TLC? How about "19 Kids & Counting"? Maybe "The Hutterites"? Have you ever wondered what the horrors that could be hidden behind those shows? Ever wonder how a person like you would fit into one of these ways of life? Or do you just watch because it's a train wreck? Well, then you need to read The Chosen One by Carol Lynch Williams!

This novel took on some dark themes that are usually shown about these cults and "religions" on the news. We watch these shows on TLC, giggle that we'd never be able to stand it, and ignore the feeling that there's something wrong with these shows. We just blow off the issues, and only focus on what they show on TV -- falsely believing that they're just like us. I'm not dissing you guys, because I do the same. I also like pretending it's all like they have it on TV, and that this doesn't go on anywhere around us. It does though, and bad things can happen. Ever noticed how robotic the kids are on "19 Kids & Counting"? How they quickly avoid questions having to do with the outside world? Or how, on "Sister Wives," how the kids feel about the path their parents chose? Ever wonder what religion sect and what in the Bible Hutterites follow? (The last one: They were a sect of Amish that broke away. Mainly, the religion concentrates on keeping women lower than the men. Nothing else.)

Well, this novel shows you. Goodreads summarizes, "Thirteen-year-old Kyra has grown up in an isolated community without questioning the fact that her father has three wives and she has twenty brothers and sisters, with two more on the way. That is, without questioning them much---if you don’t count her secret visits to the Mobile Library on Wheels to read forbidden books, or her meetings with Joshua, the boy she hopes to choose for herself instead of having a man chosen for her.

But when the Prophet decrees that she must marry her sixty-year-old uncle---who already has six wives---Kyra must make a desperate choice in the face of violence and her own fears of losing her family forever."
This novel was very well done, and it'll make you pause and thank God that your parents never joined a cult where these things happen. Read this novel if you want to feel thankful for what you have, all the joys in your life. 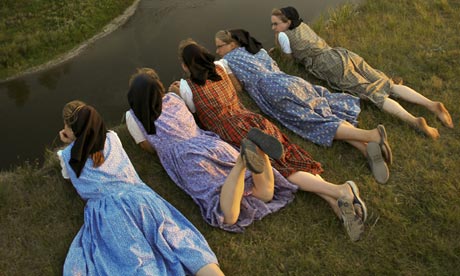